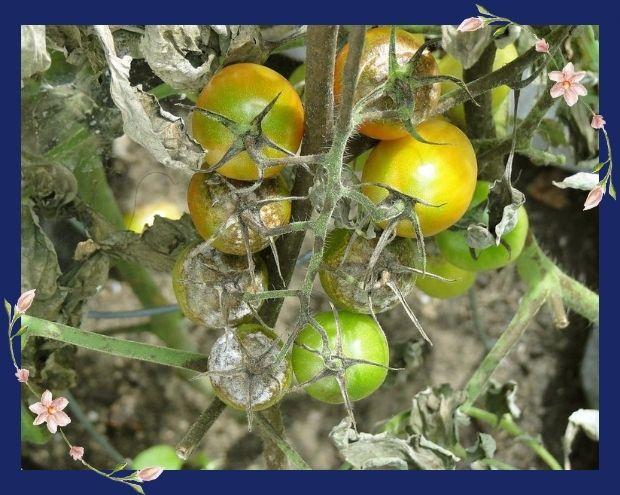 Just a heads up, this post contains some affiliate links. That means that we earn a small commission if you buy the product at no extra cost to you. That allows us to continue to research and share interesting articles with you. :)

Tomato blight is a fungal disease that can devastate a tomato crop. It is important to take measures to control the spread of the disease and to dispose of infected plants properly.

Composting is a great way to dispose of infected plants and help control the spread of the disease.

As a general rule, the soil in which tomatoes with blight have been grown should not be reused for growing other crops. Blight is a plant disease that can be caused by various fungi, bacteria, and viruses. These pathogens can remain in the soil and infect new plants that are grown in the same soil. Therefore, it is best to avoid using soil from tomatoes with blight to prevent the spread of plant diseases.

What Is Tomato Blight?

Tomato blight is caused by the fungus Fusarium solani. It emerges during rainy weather and is considered a soilborne disease.

Fusarium solani can infect tomato plants during the growing season, and when rains come, it spreads from plant to plant via emerging fungal spores.

Once tomatoes are infected, they begin to wilt and lose their leaves. If the disease spreads out of control, the entire plant will eventually die.

The aboveground parts of the tomato plant may still become infected if the environment has remained moist for long enough for the fungus to spread from one plant to another.

Early signs of the disease include:

There are two types of blight that affect potatoes: early blight and late blight.

Early blight is more prevalent in areas where the growing season is short, such as the Northeast United States or further north in the UK in places like Scotland.

Once tomato blight has set in, it is important to remove any affected plants from the garden immediately. This will help to prevent the spread of the disease.

Once the plants have been removed, the area should be cleaned up and all plant debris should be removed. The compost pile should also be removed and destroyed to prevent the spread of the disease.

Some gardeners find it easier to burn blighted tomato plants, but this should always be done with the utmost care and with consideration for your local environment. Bonfires should never be started in areas with a drought concern.

What Do You Do With Soil After Tomato Blight?

After tomato blight, what do you do with the soil? Is it safe to compost?

Blights can be tricky. Some types of blight, like early or late blights, are fungal diseases that attack the above-ground parts of the plant, like the leaves.

Other types, like bacterial canker or fusarium wilt, affect the plant’s vascular system and can kill the entire plant.

Regardless of the type of blight, once a plant is infected, it should be removed from the garden and disposed of properly. This is because the spores that cause blight can overwinter in the soil and infect next year’s crop.

So what do you do with the soil after tomato blight?

Once tomato blight has been identified in a soil sample, the first step is to remove all infected plants and debris from the affected area.

The next step is to till the soil to a depth of at least 6 inches to help break up any remaining infected plant material.

Usually, we wouldn’t recommend tilling soil, this is because the no-till method is better for soil health and the environment, but in this case tilling the soil is a better way of controlling blight.

Afterward, the soil should be treated with a fungicide labeled for use against tomato blight.

Finally, it is important to monitor the affected area closely for any new signs of infection.

The disease is caused by a fungus that attacks the leaves, stems, and fruit of a plant. This can cause the plant to die.

Blight can also spread to other plants through the air or soil. Soil that is contaminated with blight can be very difficult to clean up.

Blight is a plant disease that can spread quickly and infect other plants in its vicinity. Blight can be caused by several different types of fungi, bacteria, or viruses, and once it takes hold, it can be difficult to control.

Here are some other plants that can be contaminated by blight:

Does Blight Stay In Soil?

Soil that has been contaminated with blight may not be safe to use for growing crops or gardens.

The fungi that cause blight can survive in the soil for years, and may still be able to infect plants even after the soil has been treated.

If you are unsure whether or not your soil is contaminated with blight, it is best to err on the side of caution and avoid using it.

What To Do If You Think Blight Contaminated Your Crop

The best way to keep blight from spreading is to use preventative measures.

This includes using a number of different growing techniques and crop rotation protocols.
If you suspect that your plants have been affected by blight, the first step is to remove the affected plants from the garden.

It can also be helpful after tomato or potato blight to remove any other plants in the area that are susceptible to the disease.

Blight can also spread through contaminated tools or containers that have been used in a previous growing season, so it’s important to clean up these tools and containers as well.

Back To The Good Life is a participant in the Amazon Services LLC Associates Program, an affiliate advertising program designed to provide a means for sites to earn advertising fees by advertising and linking to Amazon.com. We also participate in other affiliate programs which compensate us for referring traffic.